On Saturday 8th April 2017 around 200 boat dwellers marched in defence of their homes. The national Boats Are Homes demonstration was organised in protest against Canal & River Trust’s (CRT) policy of evicting or threatening to evict travelling boat dwellers if they do not comply with unlawful travel requirements. Boat dwellers from all over the waterways took part.

The boaters marched to number 10 Downing Street to hand in the ‘Boats Are Homes’ petition to the Prime Minister which has been signed by more than 33,300 people. The petition calls on the Prime Minister to intervene to stop Canal & River Trust making boat dwellers homeless. 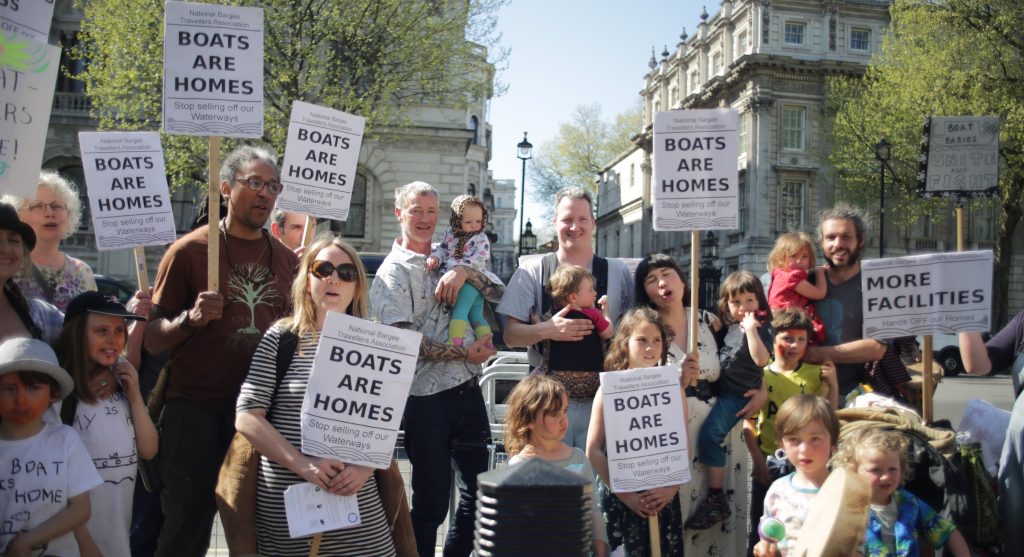 The march then continued to the Department for Environment, Food and Rural Affairs in Smith Square to hand in a letter demanding that the Government takes responsibility for stopping CRT’s unlawful enforcement policy against boat dwellers.

As well as an end to evictions and unlawful travel requirements, boat dwellers’ demands include more basic amenities such as water taps, sewage disposal and rubbish disposal facilities. The march also demanded an end to the privatisation by CRT of public towpath mooring space on its waterways. Many believe that the heightened enforcement from CRT has a direct correlation with the gentrification and privatisation of the waterways.

CRT introduced its current enforcement policy in May 2015. This sets requirements that go beyond the British Waterways Act 1995. The 1995 Act clearly states that boats without a permanent mooring should travel to a different place every 14 days, but it contains no requirement to travel a minimum distance or to follow any specific cruising pattern beyond this. CRT is now imposing minimum distances and specific cruising patterns but has not stated what distance it considers to be “far enough”.

The majority of the cases dealt with by the National Bargee Travellers Association (NBTA) are those of boat dwellers being threatened with eviction by CRT. At least 1,576 boaters without a permanent mooring have had their homes threatened by restriction of their licence renewal to 6 months according to figures released by CRT. This represents around one third of the community of boat dwellers without permanent moorings. The convergence of boat dwellers from all over the country for a common cause inspired many of the people attending to carry out further actions in defence of their homes and community. 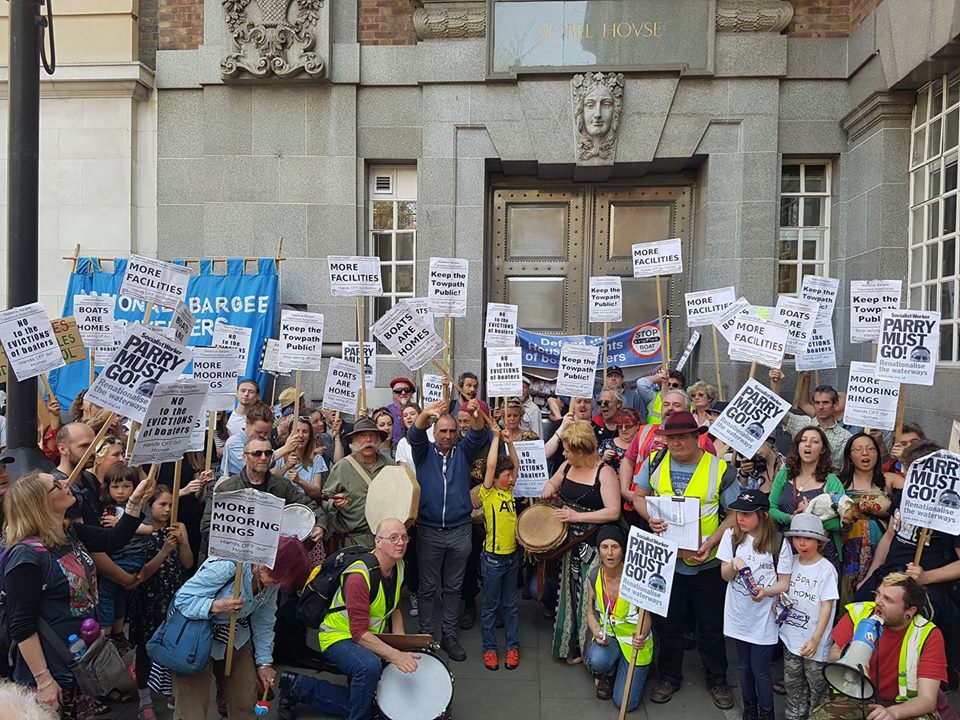 Pamela Smith, Chair of the National Bargee Travellers Association said: “The Government must keep Canal & River Trust in check. This so-called charity receives at least £39 million each year in Government funding. This is taxpayers’ money; our money. There must be accountability to Parliament, and ultimately to us, the people, for whom the charity holds the waterways in trust.”

“Canal & River Trust is threatening many with homelessness at a time when we are facing the most serious housing crisis since 1945. The result of the charity’s policy is that often it is the most vulnerable boat dwellers who are being threatened with eviction and Canal & River Trust knows this.”

“The law hasn’t changed since 1995 but boat dwellers whose licences have been renewed without any issues going back 10 or 20 years have recently been told that their annual travel patterns are no longer compliant.”

“Canal & River Trust’s recent distance requirements mean that boat dwellers are now having great difficulties staying in work and keeping their children in school. If they fail to comply with these requirements, their homes can be seized by the charity. This is a planned strategy to put pressure on boat dwellers without permanent moorings to force them off the water.”

“No boat dweller who complies with the 14 day limit in one place should have their home threatened with removal. This is not what Parliament intended when it passed the British Waterways Act 1995. The law was written with a wide scope to include many different patterns of boat use”.