CRT attempted to seize a boat on the Kennet and Avon Canal on Wednesday 16th October after wrongly denying the boater the opportunity to license the boat. The seizure was prevented by the intervention of the Legal Officer of the National Bargee Travellers Association (NBTA) Nick Brown, who spoke to the police, the boater and a CRT Solicitor on the phone during the attempt to remove the boat. The owner had locked himself inside the boat which had been chained to another boat. The seizure team had begun to tow the boat away despite knowing that the owner was inside the boat. The NBTA intervened after the police had threatened to arrest the boat owner if he did not leave the boat.

The boat had been served with a Section 8/13 notice in March 2019 while in the ownership of the previous owner, but this had not been served on the boat. A copy of the notice was served to the current owner in mid September as the result of a phone call to CRT Boat Licence Support Officer Corrine Rotherham. This was the first time that the current owner knew of the Section 8/13. A further letter was served in early October.

As the result of the notice in mid September the owner had tried to licence the boat but CRT refused to issue him with a licence because they would not accept that he was the owner. This is despite previous email correspondence between the owner and Ms Rotherham about the boat.

Following the intervention of the NBTA, CRT Solicitor Lucy Barry spoke to Wales and South West Boat Licence Support Supervisor Sheila Shaw who overrode Ms Rotherham’s decision not to let the owner license the boat. Ms Barry informed NBTA that CRT accepted that there were no issues with the BSS and that if the boater bought the licence and insurance on the spot the seizure would be stopped.

The boater immediately bought insurance and a CRT boat licence online. On the strength of confirmation that the boater had bought the licence, CRT stood down the seizure team of enforcement staff, Commercial Boat Services contractors and police.

NBTA Legal Officer Nick Brown said “Some very serious breaches of the boater’s rights under the General Data Protection Regulation (GDPR) and Article 8 of the European Convention on Human Rights occurred in this case and CRT should immediately carry out a serious case review”.

“The key point is that the boater declared to Ms Rotherham that he was the owner and gave her instructions under GDPR to speak to me on his behalf and Ms Rotherham refused; she informed me that she would not talk to the NBTA on the grounds that she did not recognise the boater as the owner. She then terminated the call. This is a breach of the owner’s rights to have control over how their personal information is processed under GDPR.”

The photograph shows Boat Licence Support Officers Matthew Preston and Corrine Rotherham, plus a Commercial Boat Services employee, on the towpath by the threatened boat, which was moored on the outside of the boat in the picture. 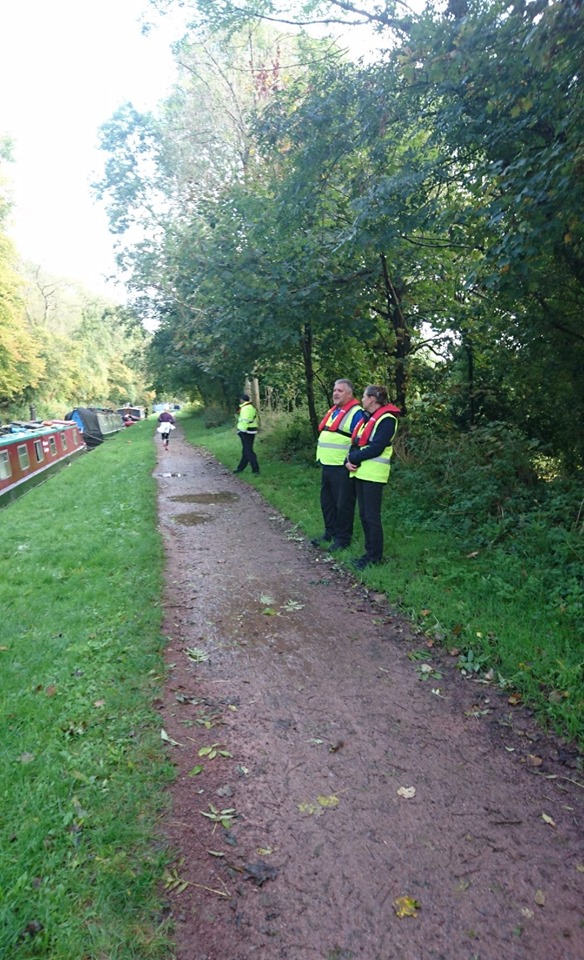