and instead takes positive action to:

All are welcome to join this demonstration for our basic rights on Saturday 16th April 2016 at 12.30pm. Meet under the NBTA’s banner on the corner of Gower Street and Euston Road, London NW1 2BU. 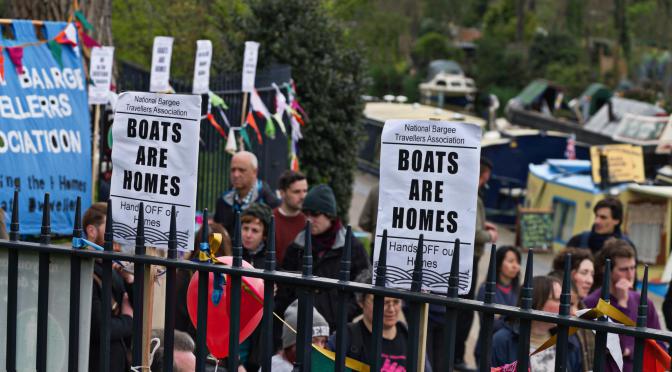 It is coming up to a year since Canal & River Trust (CRT) rolled out its unlawful new policy of either refusing to renew or issuing restricted (short term) licences to boaters without a permanent moorings who CRT claimed had not travelled in the ‘correct’ manner (sufficiently far or on a “progressive journey”).

Many in our community have been affected by the threat of losing our homes and some boat dwellers have already been evicted by CRT.

CRT has not just gone after boaters who it considers not to have travelled ‘far enough’ (even though the boaters have complied with the law). CRT has also shortened or refused to renew the licences of boat dwellers who have travelled up to 100 miles. It seems CRT’s aim is to reduce the numbers of boat dwellers without a permanent mooring, and it appears not to care who it gets rid of.

The law that states that we can stay for 14 days in any one place. We don’t need CRT making up unlawful extra ‘rules’. We must step up the campaign to stop CRT restricting or refusing to renew the licences of boaters whose travelling pattern is completely lawful.

What is more, CRT has reduced the time limits for mooring in some areas. Some “14 day” mooring spaces have been reduced to as little as 24 hours. Long stretches of the canal bank are now concreted over, making it impossible to moor in large areas of London and other urban areas. CRT has failed to maintain the canal bank. In some cases CRT even plans to sell off stretches of waterway contrary to the assurances that British Waterways (the forerunner to CRT) gave to Parliament in 2012.

CRT made a surplus of £39.4 million in 2014/15 and holds a reserve fund of £660 million. CRT can easily afford to install more facilities for boaters. CRT is more than equipped to repair waterway banks that are currently impossible to moor on. Instead, CRT has taken away or failed to repair water taps, sewage and rubbish disposal facilities.

Boat dwellers will be joining the Peoples Assembly Against Austerity demonstration on 16th April 2016. The one key demand of the demonstration is for housing and that our community deserves better. We will not be alone. We will march with others demanding decent housing. We will hand in the petition below to Parliament demanding that the Government pressures CRT to stop its attack on boat dwellers without a permanent mooring:

We plan to take a picture of all the boat dwellers on the march to bring to another demonstration at the CRT offices a few weeks later.