Canal & River Trust (CRT) was forced to return a seized boat following the threat of legal action by its live-aboard owner. The charity had seized the boat, which actually had a valid licence at the time, on 6th August 2020 without obtaining a Court Order, which is unlawful if a boat is used as a home. The Human Rights Act 1998 entitles citizens to have the proportionality of removing their home assessed by an independent court and to defend themselves in a fair trial.

The boat, Milasa, was returned to its owner Paul Buga on 24th November 2020 after his solicitor commenced Judicial Review proceedings against CRT. CRT had claimed that the boat was not Mr Buga’s home and that there was no evidence that he lived in it. However, Mr Buga lives in a pair of boats of which Milasa is the motor boat. Milasa was therefore Mr Buga’s only means of complying with the law regarding boat movement. The Solicitor argued that Milasa had a valid licence, was an essential part of Mr Buga’s home and that it had moved in accordance with CRT’s current requirements. A Claim Form should have been issued giving Mr Buga the opportunity to defend himself in Court against the removal of the boat.

Paul Buga had previously been on hunger strike for more than two weeks outside Downing Street in an attempt to get his boat back from CRT. Alerted to concerns for his wellbeing, the NBTA stepped in to support him and to find him a solicitor.

CRT returned the boat to the owner on the River Lea free of charge, paying for craning and road haulage from Chester. The boat had been seized by CRT and its subcontractors Commercial Boat Services (CBS), who took it to premises believed to be under CBS control at Greenwalls Farm, Dodleston, Chester. The NBTA believes from previous experience that all boats seized by CRT are taken by road to these premises. 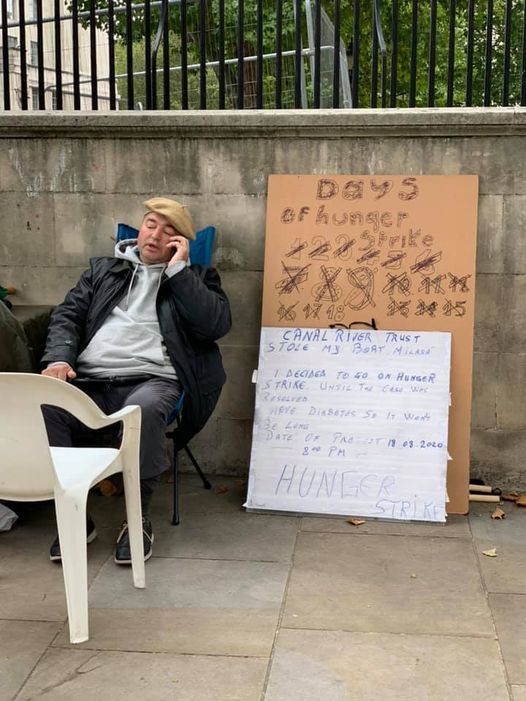 CRT has powers under Section 8(2) of the British Waterways Act 1983 to remove boats from its waterways that are sunk, stranded, abandoned or “moored therein without lawful authority”. CRT deems that a boat is “moored therein without lawful authority” in cases where CRT has terminated or refused to renew the licence or where the boat appears to be unlicensed.