On 16th April, nearly 300 boat dwellers marched to Downing Street to hand in a petition against the Canal & River Trust’s (CRT) policy that threatens Bargee Travellers with restricted-duration licences and even eviction. Along with protesting against evictions, we were  demonstrating for the need for more mooring rings and more facilities such as water taps and sewage points. 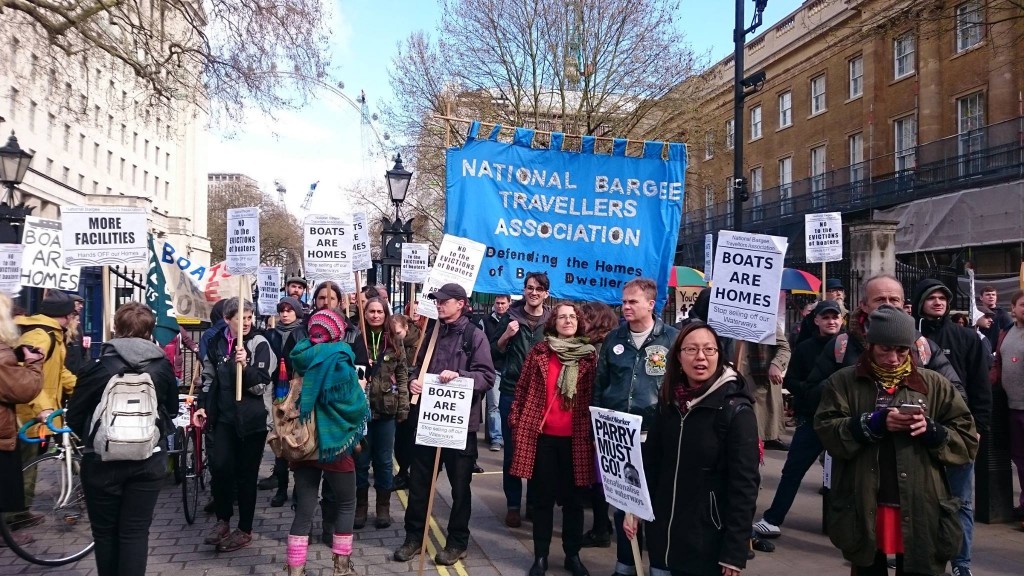 CRT’s policy was introduced in May 2015 and since then CRT has restricted licences and evicted boat dwellers without a home mooring for not travelling far enough or travelling in a pattern of movement not to CRT’s liking. To add insult to injury, CRT does this without stating a minimum distance or pattern of movement that they believe would satisfy them. Instead CRT has continued to enforce this policy inconsistently.

CRT’s policy sets requirements that go beyond what is required by the British Waterways Act 1995. The Act does not contain any requirements to travel a minimum distance or to follow any specific pattern of movement. The Act clearly states that boats without a home mooring must be navigating and must not stay in one place for longer than 14 days.

The petition, “Boats are Homes”, has been signed by nearly 29,000 people. The petition asks the government to put pressure on CRT to end this policy and stop the unnecessary eviction of boaters.

The NBTA has a growing number of cases where boat dwellers are being threatened with eviction by CRT. Since the policy was introduced (on 1st May 2015), to March 2016, 1,049 boats without a home mooring were offered a restricted licence (19% of the continuous cruising community) and 12% of the entire community took up these restricted licences. On 10th March 2016 CRT confirmed that it would no longer issue restricted licences for so-called “non-compliance” and would instead withdraw licences leading to the boater losing their home.

Living on a boat was once a peaceful way of life but now it has become a stressful and difficult existence. The threat of homelessness increases the more the policy is enforced by CRT and at a time when people, especially in London, are facing a desperate housing crisis.

“Due to CRT’s policy, people are leaving their way of life as travelling boat dwellers. Many in our community feel that CRT is trying to force us off the waterways. We are under increasing strain due to the CRT’s policies.”

“CRT doesn’t have a set distance or way we must move. They deal with us inconsistently, refuse and restrict our licences without giving us clear reasons and threaten people with eviction.”

“However, today we have shown that we will stand together. We will not let our community be picked off one by one. We are fighting for our homes and our way of life”.

On 10th May 2016 the NBTA will protest at CRTs headquarters at:

and the Leeds Office at:

Both protests start at 12.00. Please join us in taking our messages home to CRT. Fight Back against this draconian policy!!