The Environment Agency is being accused of using underhand tactics to have currently unregistered riverside land put into its name, behind the backs of local live-aboard boat residents. The section of currently unregistered riverbank in West Molesey, Surrey, has been lawfully occupied for many years by a group of quiet and friendly off-grid boat owners. The group is constantly accused of occupying the moorings illegally, but as the land is unregistered, with Land Registry checks proving this, they are within the law to stay there. They are challenging the Environment Agency’s claim to the land.

The community of about 10 boats living a sustainable lifestyle was given seven days notice by the Environment Agency to leave the river bank where they have been living for many years. There was no prior warning of this action.

Some residents have lived on the moorings for as long as thirteen years, others between two and eight years. The Environment Agency claims that it owns the land, however proof has been obtained from Land Registry Records that it does not.

The Environment Agency has applied to the Land Registry to have ownership transferred to it through adverse possession. It claims it has maintained and used the land, but there is no evidence of this whatsoever. It is the live aboard boaters who have maintained and occupied the land, regularly clearing litter and debris from the land and the water’s edge and maintaining the wharf wall and surface.

The Environment Agency has declared that it will evict the existing residents if its claim for the land is successful. No compassion has been shown for the families. One young couple has a four week old baby. One resident is a social worker, working as an outreach worker for London’s homeless; another is a local police officer.

The land in question is a quiet stretch of Thames Riverbank with no houses, adjacent to a large Thames Water site. The very fact that it is permanently inhabited by these boaters makes it a safer place for the whole of the local community.

The current residents all have valid River Thames registration, insurance and boat safety certificates. They take their waste to the nearby boaters’ sewage disposal point. They are quiet and law abiding. All that this boating community would like is to continue to live peacefully where they are, as they have for many years. 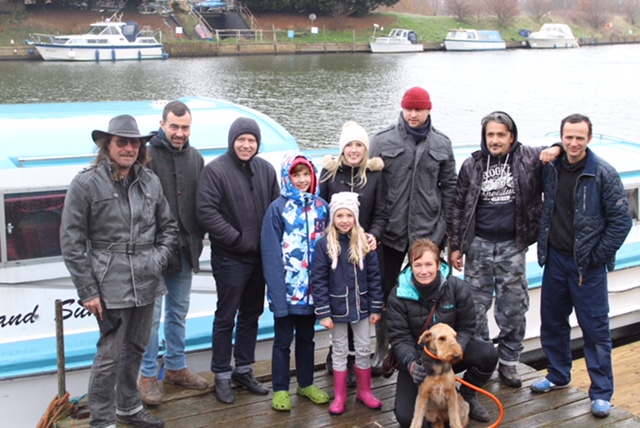