Our community’s action is going brilliantly against the unjustified ‘no mooring’ sites of the ‘safety’ zones on the River Lee. Even with the Canal & River Trust (CRT) having quite poor competence in recording boat sighting data, they say that there have been at least 154 boats on 295 occasions since October 2021 moored in the so called ‘no mooring’ sites. This mass collective action of disobedience is a great ongoing success.

The majority of boaters that use the River Lee are rightly angry or at least disappointed at CRT’s behaviour over the water ‘safety’ zones. Now CRT is rubbing salt into the wound in their recent public statement; they are trying to liken all ‘no mooring’ spaces in the water ‘safety’ zones to the same as mooring improperly, such as mooring on a lock landing or at a water point. This is shameful behaviour by CRT.

The National Bargee Travellers’ Association London branch (NBTAL) have provided a document to CRT outlining where we consider it is unsafe to moor and where it is perfectly safe to moor without blocking the navigation. It shows that mooring on the vast majority of the ‘no mooring’ sites in the water ‘safety’ zones does not block the navigation or make the navigation unsafe. The River Lee is a wide river and there is enough space to share with other users.

Nevertheless, CRT says in its recent statement that on the 10th of January it will apply a process which CRT is now calling the “Improper Mooring Process” which might lead to action against boats on the ‘no mooring’ sites.CRT is mustering up the bluster. Nevertheless, we don’t take this threat lying down; if CRT uses enforcement over these mooring spaces we will take CRT to court! CRT doesn’t have a legal leg to stand on and we will prove it in court.

However, it is not all about the courts. Let’s keep up the pressure on CRT. They are obviously rattled by the mass action resisting the unjust restriction.

Let’s keep it up, continue to resist the ‘no mooring’ sites.

On top of this we are organising a protest to march on CRT offices at Little Venice on the 26 March.

Let’s show CRT as a community we stick together!

As a community we will win!

Here is a link to the NBTA London  position paper and maps showing which ‘no mooring’ locations in the ‘safety’ zones we are challenging: here:v5 NBTAL position on red zone Jan 2022 (1) 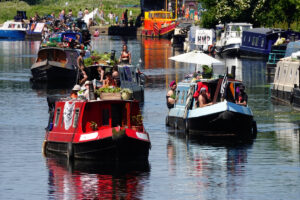 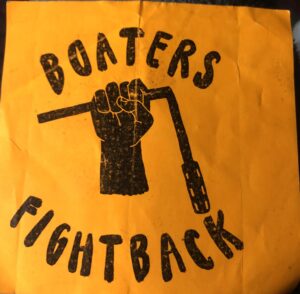