Canal and River Trust (CRT) have recently announced that it intends once again to target boaters without a home mooring (also known as continuous cruisers) in London and reduce their numbers. Their latest “survey” of waterways stakeholders is introduced with the implication that there are too many of us, and the leading questions in the survey invite people to imagine the “impact” of having more boaters on the waterways in their area. *

In an attempt to cover up their continuing incompetence in maintaining the waterways in London, the trust is falling back on its most favoured tactic: to divide users of London’s waterways in order to marginalize continuous cruisers.

Both CRT and its nationalized predecessor, British Waterways, have always seen boaters without a home mooring as a problem and have made repeated and regular attempts to push them off the London network in particular.

Since rebranding itself in 2018 as a “wellbeing” charity, complete with new waste of money logo, CRT has promoted the canals and rivers it manages as mental wellness spaces. In announcing this new drive to make the lives of boaters more miserable, it revels in its success in making the waterways more popular, while undermining the wellbeing of boaters. The increase in boats in the last 20 years has turned the London network from little more than a ditch no one wanted to go near to a vibrant and colourful space, despite the attempts of the navigation authorities and not because of them This is the wrong kind of popularity it appears; and so boaters, and especially those without a home mooring, will have to pay a price.

This new survey and consultation come only two years after CRT’s last waste of money on this area, The London Mooring Strategy (LMS). This promised new facilities and access to new mooring opportunities. Two years later, and with most of the LMS’s proposals not implemented and consigned to history, CRT are again using the pressure on facilities as a reason to tackle the “boats problem”, with absolutely no reference to the success or otherwise of the LMS. And 2 years later CRT are still pushing out their “unsustainable increase” narrative, despite the fact that the increase in boats is actually slowing.

In these times of Covid 19, where many boaters have feared to leave their boats because the towpath has become a popular exercise space with CRT doing nothing to ensure social distancing, this latest attack on the rights of boaters in London who live on their boats is cruel, if not unusual.

To CRT, the continuous cruisers of London are mere vermin standing in the way of their attempts to gentrify the canals and monetise the towpaths.

NBTA London is opposed to any proposals which would result in an attack on boater’s rights to navigate the London waterways as they could on any part of the national network. If the final part of CRT’s consultation timetable is anything to go by: “July 2021: Implement mooring zone proposals”, the trust has already decided what they shall be.

We encourage boaters without a home mooring to engage with the survey and subsequent virtual meetings to ensure that our voice is heard.

Join us, fight the cull. nbtalondon@gmail.com 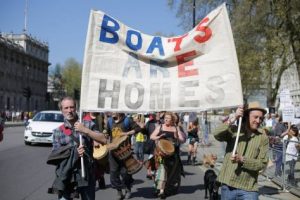 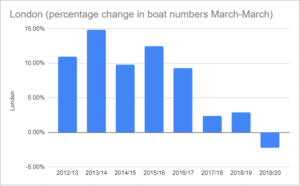 Dave Mendes Da Costa (an NBTA member and an elected member of the CRT council) made this chart above of the percentage change in boat numbers since 2012 using data from CRT Press Notices. Note that for 2018/19 and 2019/20 the data covers London & SE, whereas before it is only London. This is due to the changes in CRT’s regions.

It tells a different story to the one CRT want to tell.