On 2nd February 2017, Oxford City Council announced that it was dropping the proposed waterways Public Space Protection Order (PSPO). A consultation by the Council had provoked massive opposition to the PSPO, which would have criminalised the normal domestic activities of boat dwellers, such as heating their homes with solid fuel stoves and generating electricity for lighting by running engines or generators. The PSPO would also have violated the Public Rights of Navigation on the River Thames and its tributaries in Oxford in criminalising mooring without the permission of the landowner. The PSPO also proposed £100 on-the-spot fines or prosecutions ending in £1,000 fines. The PSPO sought to override primary legislation such as the British Waterways Act 1995; the Thames Conservancy Act 1932 and the Human Rights Act.

The proposed PSPO was opposed by a broad coalition called PSPnO that attracted widespread support including Caroline Lucas MP and comedian Mark Thomas, Liberal Democrat and Green councillors in the city and civil liberties campaigners. The NBTA provided a detailed response to the consultation and worked with PSPnO including holding a number of meetings with city councillors and officers. 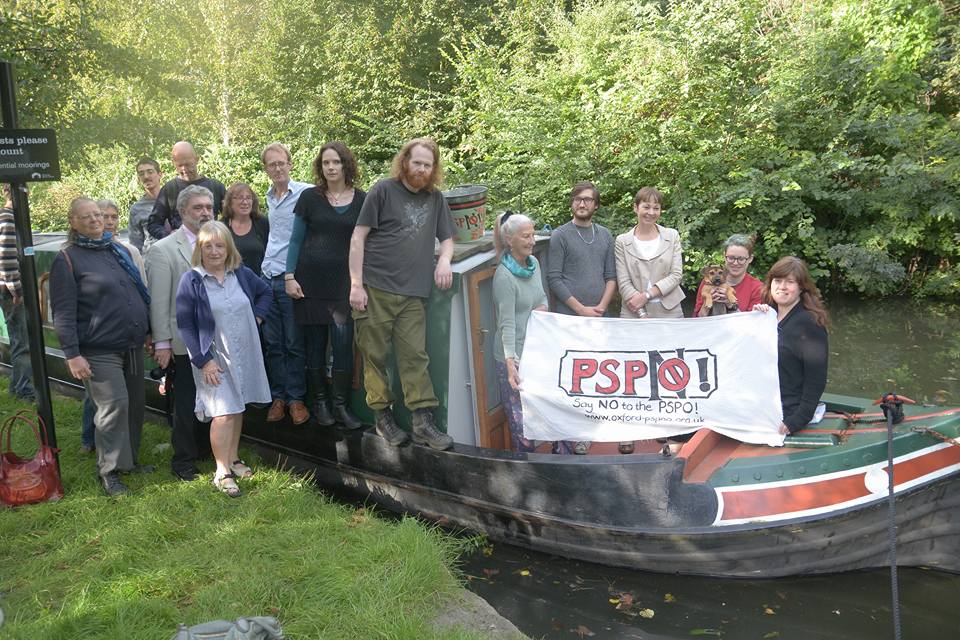 However boat dwellers in Oxford remain vigilant as the Council’s statement includes plans to address what it refers to as “anti-social behaviour” at Castle Mill Stream, Aristotle Lane, Aston’s Eyot and the south bank of theThames between Folly Bridge and the ring road.

The PSPO proposal, which was made public in early 2016, was being developed at the start of 2015 by the secretive Oxford City Council-convened anti-boater group Unlawfully Moored Boats Enforcement Group (UMBEG), which brought the Environment Agency, Canal & River Trust, Thames Valley Police and riparian landowners such as Oxford University around the table to devise ever stricter mooring restrictions and facilities closures to drive boat dwellers out of Oxford. These restrictions also had the unintended consequence of discouraging leisure boaters from visiting the city. UMBEG has now been disbanded.

Oxford City Council was censured twice by the Information Commissioner after it refused to release information about UMBEG in response to Freedom of Information requests, claiming that the information was not held, despite the Council being the convenor and host of the UMBEG meetings. See

Green councillor David Thomas, who campaigned with others against the proposals, said the move had ‘vindicated’ opponents of the PSPO. He added: “This is a fantastic result for campaigners in Oxford but we must also recognise the council has listened to people’s concerns. It has also opened up a dialogue. The boating community risks being marginalised because of misunderstandings and this will hopefully mean they now have a voice”. Liberal Democrat councillor Liz Wade said: “We are very pleased that the boaters’ powerful representations have been taken on board, but there is still work to do.”

Here is the Council’s statement:

“Oxford City Council has concluded its public consultation on the draft Waterways PSPO following detailed discussions with residents and stakeholders. Officers will be recommending to the City Council’s Executive Board that the draft Order should not go forward in its current form, and that a detailed review is undertaken of the ways in which the city’s waterways are being used and how the opportunities which they present could be developed.

This would include a view of increasing the number of temporary and permanent mooring spots, improving services for boaters and further promotion of the city as a tourist destination. The City Council, following complaints from local residents at various points on Oxford’s waterways, drew up a draft PSPO (Public Spaces Protection Order) last March to tackle the reported public safety and anti-social behaviour issues. The draft Order for consultation indicated a number of issues which could potentially be tackled through an Order of this type.

Over the last year, officers have met with boat owners, riparian home owners, landowners and statutory bodies to talk through the proposals, and gain knowledge about life on the waterways and the experiences of anti-social behaviour. Meetings were held with interested parties, City Councillors and officers visited the waterways, and the stakeholder consultation received more than 30 responses. Following these discussions, officers are recommending not to take forward the PSPO in the form that was proposed last year.

Instead, they will draw up alternative proposals designed to improve public safety and address anti-social behaviour in four specific areas: Castle Mill Stream, Aristotle Lane, Aston’s Eyot and the south bank of the River Thames between Folly Bridge and the southern Ring Road Officers will now look at each of the four areas and come up with action plans, involving local stakeholders, to address the specific issues in each location. These recommendations will be taken to a future Executive Board meeting in the spring for decision.

On top of this, it has become clear that it would be timely to conduct a review of the number and types of mooring spaces across Oxford’s waterways, and of services for boaters. Councillor Dee Sinclair, Executive Board Member for Community Safety, said: “We knew there was anti-social behaviour taking place across Oxford’s waterways, but before the engagement we did not have detailed knowledge of where this was taking place or the best way to tackle it”.

“It has been hugely insightful and valuable to have detailed conversations with stakeholders, particularly those from the boating community, to get their views and experiences. We have listened to these insights and ideas, and we have made changes to our proposals to reflect them.”

“This is how the City Council likes to work: we are told about a problem, we talk to those affected and, together, we find the right approach to address the situation. We will tackle the evidence of public safety issues and anti-social behaviour in other ways, and work with the police and other partners to tackle such behaviour where it occurs. The PSPO route is, we feel, too unwieldy to be appropriate. Finally, we would like to thank everyone who took part in the consultation process.”