On Tuesday 10th May 2016 between 12pm and 2pm about 90 boat dwellers without home moorings took part in demonstrations outside Canal & River Trust’s headquarters in Milton Keynes while 15 protested at the charity’s licensing office in Leeds. They were there to express their opposition to the charity’s punitive and unlawful enforcement action against boats without a home mooring. 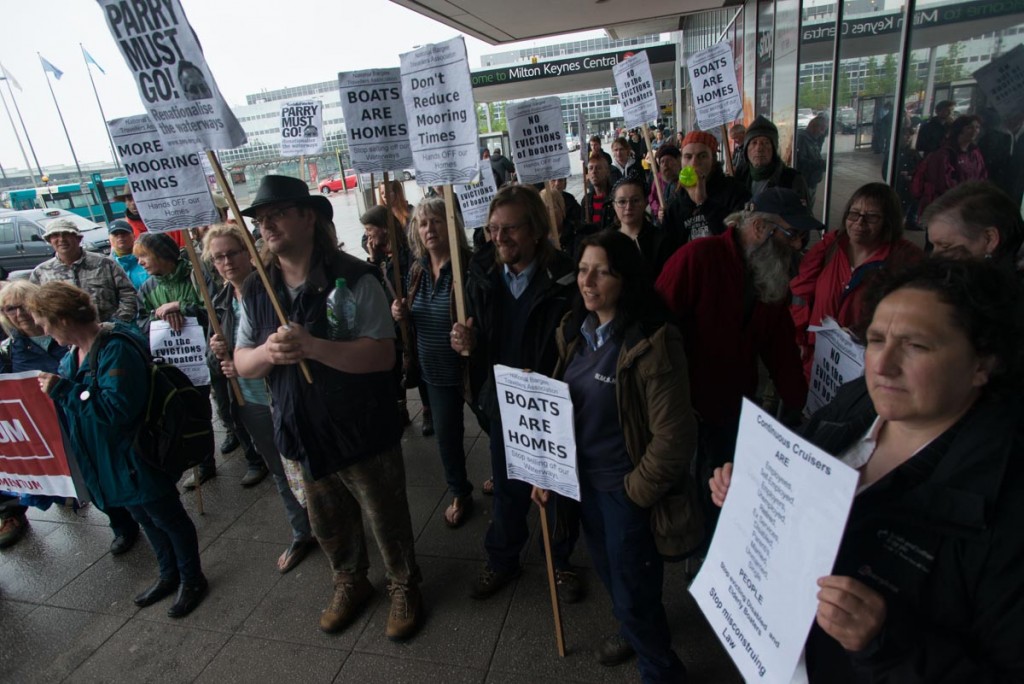 The right to use and live on a boat without a home mooring is enshrined in the British Waterways Act 1995. It is not within Canal & River Trust’s legal powers to enforce its draconian new ‘rules’, which set requirements that go beyond the 1995 Act. Yet the Trust has stated that it is very unlikely that a boater who travels within a range of less than 20 miles is complying with these ‘rules’. In addition boaters who have not travelled in a linear fashion but have turned round, for example to access services, have been threatened with eviction. The NBTA is aware of cases where boaters have travelled much more than 20 miles but have still been served with eviction notices.

Canal & River Trust’s enforcement policies are vague and inconsistently imposed. It uses these policies to reduce the number of full 12 month licences by restricting licences of those it considers non-compliant to 6 months or refusing to renew licences altogether.

The NBTA has a growing number of cases where boat dwellers are being threatened with eviction by Canal & River Trust. Figures for March 2016 illustrate that since the policy’s introduction, 1,130 boats without a home mooring have been forced to take a restricted licence. Boaters on a restricted licence are more likely to face eviction, have their home taken away and effectively be made homeless by Canal & River Trust.

Jeff is a teacher who has lived on the waterways for over 8 years. He is on his second restricted licence having been refused a full licence, and was threatened with eviction last Christmas. His licence was refused for turning his boat around and going back the way he came; Canal & River Trust did not approve of his pattern of movement. The NBTA supported Jeff in his campaign to get his licence back, which led to Canal & River Trust’s own u-turn whereupon they conceded to granting him a licence. However, this was a restricted licence which Jeff accepted. He says: “I find Canal & River Trust’s policy to be ill-conceived and haphazardly applied. There is an agenda at work and one gets the impression that disinformation is being used intentionally. They pick on people who they think won’t put up much of a fight. Corporate arrogance. I have now been on the waterways for eight years and found that after seven of them I suddenly became a problem. They have never liked the outcome of the creation of the Waterways Act of ’95 and have been trying to circumvent it for DECADES!’ Please note that the British Waterways Act 1995 enshrines our right to have a licence for a boat without a home mooring”.

Helen A is a psychotherapist in a private practice and has lived on the waterways for 7 years. Helen says: “Canal & River Trust needs to stop discriminating against families with children at school and enter into a transparent, constructive and eloquent dialogue with boat dwellers without a home mooring, and cease the imposition of this new prohibitive, unclear, inarticulate and inconsistent policy.”

David works in the media. He has lived on the waterways for about 10 years and feels Canal & River Trust is pushing him off the water, so much so that he is now thinking of leaving his waterway home.

Helen B is a care worker who does supply teaching with children and adults with learning difficulties and has lived on the waterways for 2 years. She says: “This Canal & River Trust policy is stressful and misleading. I am genuinely doing my utmost to improve my life yet my attempts to do so are repeatedly thwarted. I am registered now at 3 care agencies, my income fluctuates dramatically and for this reason planning a future is very difficult. After just two years on the river the levels of uncertainty have rapidly increased. I am doing everything I can to live a quiet, stress free life but the new policy makes living on the river anything but”.

Nicole has lived on a boat in the Milton Keynes area for 25 years. She says: “I have lived on the canal for 25 years, which is longer than I have lived on land. Canal & River Trust’s new policies have made life so difficult. I live on the canal because I love the community, wildlife, peacefulness, diversity of mooring places and have truly made it my home and way of life. I will be attending the protest because the rules have become ridiculous and Canal & River Trust are not listening to those it concerns but making life so difficult and stressful.  Also I take offence to the derogatory term a Canal & River Trust member of staff used about liveaboard boaters and this issue needs addressing.”

The staff member Nicole refers to is Matthew Symonds, the Relationship, Policy and Strategy Manager for Boating and a senior Canal & River Trust spokesperson. In a recent discussion with former colleagues, he has allegedly referred to people that live on their boats as ‘gits’.
More information can be found via this link:
http://kanda.boatingcommunity.org.uk/crt-relationship-manager-liveaboards-are-gits/
One his former colleagues wrote an open letter to report what they heard: http://kanda.boatingcommunity.org.uk/an-open-letter-to-matthew-symonds-and-crt/

In response, protesters at Milton Keynes handed in an open letter to Canal & River Trust requesting an investigation into reports of Matthew Symonds referring to boat dwellers in derogatory manner.

Lecey, a Milton Keynes local resident and train ticket office worker says: “People have lived on the waterways in this area longer than Milton Keynes has existed. I’m upset by the attacks on boat dwellers by Canal & River Trust and I’m in full support of the campaign to keep the right to allowed to live on the waterways.”

Glyn Robbins, of the Unite union housing workers branch, said yesterday: “I fully support the campaign of the NBTA. Everyone’s entitled to decent, secure affordable housing, including Bargees. The behaviour of the Canal & River Trust is making this harder. Our canals and rivers should be treated as public property, open and available to all, regardless of income. In the midst of a housing crisis, the Canal & River Trust should be supporting Bargees who make a home on the water, not harassing them”.

A spokesperson for NBTA said: “Since we were protesting at time when many of our community are at work, we are very pleased with the turn out. We hope that Canal & River Trust will sit up and listen to our concerns. It is our homes that the Trust is interfering with and our campaign will not stop until Canal & River Trust ends its punitive new policy.”.

“Canal & River Trust doesn’t have the power to set a distance or specific pattern that we must travel. It deals with us inconsistently, refuses and restricts our licences without giving us clear reasons and threatens people with eviction. However, today we have shown that we will stand together. We will not let our community be picked off one by one. We are fighting for our homes and our way of life”.