In a recent meeting between Canal & River Trust (CRT) and the National Bargee Travellers Association (NBTA) London branch, CRT stated that they have a national plan to remove 40% of litter bins from the towpaths in order to reduce litter. They plan to keep them in storage and only reinstate them if litter continues to be a problem. 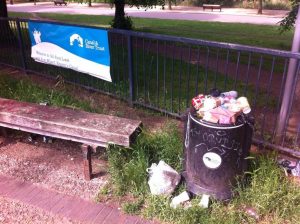 Sam Thomas, CRT’s London Customer Operations Manager, said that “there is equal evidence for and against having less bins”. To date, he hasn’t been able to share this evidence. When replying to anti-litter campaign group, Keep Britain Tidy, CRT blamed the “mistreatment” of bins as a reason to remove them:

“In London, a number of litter bins along the towpath were being mistreated and were being used by people to fly tip… This means the bins in question were overflowing… people walking along the towpath will have to carry their litter a little further to put it in a bin, or maybe eventake it home…”.

However, the plan to remove 40% of litter bins is a national policy, not just a London policy. It’s hard to argue that the “mistreatment” of litter bins in London is a good reason to take away bins nationally. Yet, CRT has already started removing litter bins. Two bins were removed in Cheshunt (Hertfordshire), one of which was next to the permanent ice cream boat. Another bin has been taken from a busy picnic area in Hackney (East London). 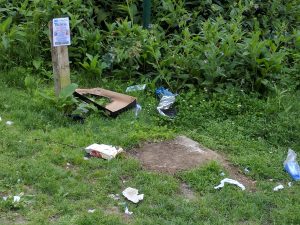 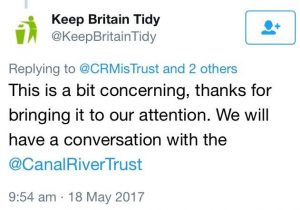 It is already a struggle to find litter bins on the towpath, particularly in west London, yet there’s never a shortage of litter. So it would be interesting to see what evidence CRT has to support their view that less bins equals less litter. Many have suggested that emptying the bins more often would solve any “overflowing” issues, yet when questioned about the frequency at which bins are emptied, CRT’s vague response stated “some daily, some weekly, some depend on season”. This is simply not good enough – perhaps they should have a clear policy on emptying bins before they start removing them.

Marcus Trower, the Deputy Chair of the NBTA said:

“When CRT told us about their plans to take away 40% of bins to reduce litter, I thought they were joking. Then to store them and put them back if it doesn’t work, sounds like a kind of dance routine with bins:

You put the bins in,

You take the bins out,

Store them for a bit,

And then put them back again.

This plan must be in CRT’s top 10 list of bad ideas. Think about the money CRT will spend on this dead end plan. If the public have nowhere to put their litter, it will be thrown on the ground, get into the water and end up around our propellers. I hope CRT has a serious rethink”. 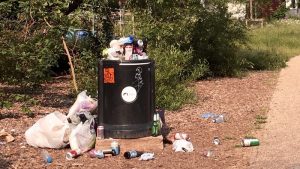