On Saturday 19th February at 12pm, NBTA will be counter leafleting CRT’s re-opening of the Hertford union canal in Victoria Park, next to Gunmaker’s gate (E3 5PE).

CRT market themselves as a charity that promotes wellbeing. This is an opportunity for us to show the public how damaging and nasty their policies are, and how they take actions which attack boaters’ wellbeing and way of life.

We will be leafleting and chatting to members of the public, as well as holding our own picnic and planning meeting for the campaign. 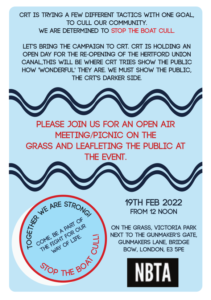